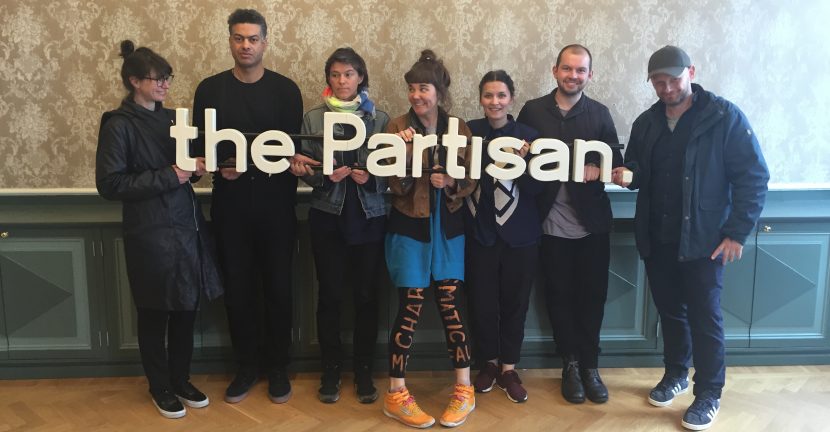 Jenny Moore/Nora Sternfeld: At the moment we are collaborating on a project for the Bergen Assembly 2016. the Partisan café is an educational/performative/artistic practice as a coffee house in the Museum of Burning Questions – a Para-Museum realised by freethought in collaboration with the artist Isa Rosenberger – and a performative platform of the freethought infrastructure project. The project is located in the former Brandstasjon in Bergen, which has been occupied for the past 10 years by retired firemen whose ambition is to found a Fire Museum on the historic site. The Museum of Burning Questions does not represent this claim, but establishes itself in the same location as a temporary alliance with the firemen; we understand ourselves as hosts as much as guests.
the Partisan café is a shared space and a contact zone. As educators and café workers we think about radical hospitality. As guests of the resident firefighters we think about reciprocities and commonalities.

Who are you working with?

J&N: We are working in a team of seven educators/performers/café workers. Our collaborators are: Tora Endestad Bjørkheim is an artist and co-editor of the Oslo-based publication Grafters’ Quarterly. Freja Bäckman´s practice is situated between art, education and socio-political work. Kabir Carter is an artist whose work has been exhibited and presented throughout Europe and the United States. Johnny Herbert is co-editor of the Oslo-based publication Grafters’ Quarterly and a PhD candidate in the Curatorial/Knowledge research program at Goldsmiths College, London. Arne Skaug Olsen is an artist and a curator, currently associate professor at Tromsö Art Academy.

How would you describe your understanding of art education?

J&N: We consider our educational work – as much as our artistic, performative and/or curatorial actions – as an organic intellectual practice. We work actively against the necessity of a choice between either marginalisation or neoliberalisation of education in the cultural field that we find unacceptable. that we find unacceptable. . We practice our educational work as a way to build situated knowledges and actions. The name “Partisan café” is actually related to a choice: partisan instead of participant. As “participation” has become a main engine of neoliberal transformation, formulating and taking up dissident stances is necessary.

How would you describe the relation between education and art?

J&N: In the project we definitely work on blurring the boundaries between both. We see our practice as artistic and educational; knowing that each has specific boundaries and distinctions and interested to play them out against each other. Art still has quite a lot of freedom and an amazing ability to reflect conditions through formal and visual means, sometimes quite playfully… but this comes with a specific position in society: it has little political impact. The “freedom” is part of neoliberal economies of investment, gentrification and city marketing and comes with quite a lot of distinction. Education, on the other hand, is more of a shape-shifter, providing amazing possibilities to reach people, to relate to heterogeneous publics. That being said, it can come with a certain resentment towards art, a patronising approach towards people, and all the paradoxies inherent in “social inclusion”. While art has incredible estranging effects, education can work strongly against the alienating and homogenizing effects of art’s distinction. Both seem important to us and we would like to work in spaces in between both logics, to make both happen: An atmosphere of educational heterogeneity and openness on the one hand, and the artistic ability to disturb normativities, create estrangements and encounter sedimented conflicts via formal approaches.

J&N: Because it is an interesting way to relate with the world and to think another possible future. We like to think of education as interference. When interfered with, art – like most ideologies, constructs, inventions and objects in the world – can be a lively, dangerous, and affective set of tools. It creates temporary alliances and communities. And it is a lot of fun.

Please describe the relation between working as a curator and working as an art educator from your point of view.

J&N: Beside the expectations of a hierarchical art field, that plays both positions out against each other we don’t see much of a difference.
Nora, working as a curator and educator, thinks that both can be (and mostly are) part of the existing hegemony. But they can also question the existing power relations. She understands both as organic intellectual practices challenging what can be seen, done and said in order to imagine and work on another possible world. Jenny doesn’t work as a curator and doesn’t consider her practice to be curatorial but artistic and performative. She thinks of performance as pedagogy because of the embodied, time-based, and improvised nature of performativity. She considers her educational work in these same terms: learning-by-doing or public-learning, letting ourselves be seen in the moment of learning.

How important is art education and mediation for a museum / an institution?

J&N: We don’t think that we have to sell or explain the importance of education for museums and institutions. As far as they understand themselves as spaces of education we have a clear claim: Secure working conditions for educators.

Which institutions provide the opportunity to discuss our personal experiences with art?

J&N: See above! We come and go from all kinds of institutions as we see necessary but aren’t interested in advertising for them.

To what extent does teaching/mediating art provide the opportunity to concrete actions for the audience?

J&N: Learning together is already a concrete action in whatever context we find ourselves (art or no art).

In your personal opinion, what are the criteria for successfully mediating art? In your point of view, what is especially difficult about it?

J&N: We refuse to formulate any criteria of success that will then create an opportunity for a ranking that will prevent us from uniting. We are for thinking the possibility of working together and thinking together which education we want and which society.

To us, this seems as important as it is difficult. To rephrase Judith Butler: “How can we come together in a world that isolates us?” In the words of feminist punk band Charismatic Megafauna, “Give her the tools, she will know what to do with them.”

Have you developed a special method or innovative strategy you’re working with?

J&N: We work on developing a café as a practice or a method. It can be a place to think and read alone or together or a starting point for a conversation or to visit the freethought exhibition. We have no special method to share, as the practice will develop and change with each encounter and this flexible group improvisation is key to it’s atmosphere. Maybe at the end of Bergen Assembly we will know more about what a partisan atmosphere and a café as an educational practice can mean…

What are you working on at the moment?

J&N: We are preparing the Partisan café as an educational space at Bergen Assembly 2016. To get a better sense of the project, this is an excerpt of our (post-)manifesto, written collaboratively together with all of the 7 educators working on the project:

Which books, projects etc. were/are important for your work – and why?

J&N: Stefano Harney and Fred Moten, The Undercommons – especially the concept of study as it opens an understanding of collective self-education that happens despite the neoliberal and conditions of education. Moten and Harney offer the on–going persistent possibility of thinking together, however capitalist and racist the world is and however fascist it becomes.

Is there a special question you would like to ask an art educator?

J&N: Do you want to have a coffee?

How would you imagine the future of art education?

J&N: Not needing to fight for recognition.

Jenny Moore and Nora Sternfeld are working on the Partisan Café in the Museum of Burning Questions for Bergen Assembly 2016. Jenny Moore is a Canadian artist, musician and educator based in London. She plays in the all-female, all-drum band Charismatic Megafauna and the Kraut-Pop band Bas Jan and works on radical sex education projects with the artist collective Bedfellows. She is the coordinator of the Partisan café at Bergen Assembly 2016. Nora Sternfeld is curator, educator, Professor for Curating and Mediating Art at Aalto University in Helsinki, part of trafo.K, an office for art, education and critical knowledge production based in Vienna and of freethought – a platform for research, pedagogy and production working as artistic director of Bergen Assembly 2016. As a curator she initiated the project the Partisan café.